In this section, I'm going to write about passing the gate and finish. Passing the gate is called gate Tsuka and finish is called Agari in Japanese. They are the ONLY two scoring plays in gateball. If stroker's ball make a successful pass through the gate, the stroker will gain the right for a continuous stroke. After you have read through this section, you can calculate the scores of gateball and decide which team wins by yourself.

What happens when your ball passes through a gate?

As the name "gateball" suggests, three gates are very important. As you already know, there are three gates called the first, second and third gate (or simply gate 1, 2, 3) I will explain what happens if a ball passes the gate and what happens if it doesn't.

1. You can't play in the court unless you pass the first gate.

The first gate is located 4m from the fourth line and 2m from the first line. The stroker has to set his/her ball in the start area which is a 2m wide rectangle as shown in the figure below. The stroker strikes the ball in the area and if the stroker's ball completely crosses over the line called "gate line", it is regarded as a successful pass. A gate line is defined as the line which connects the back side of the two legs of the gate. 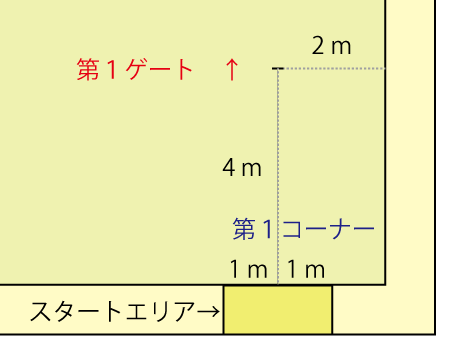 The position of the first gate and the start area 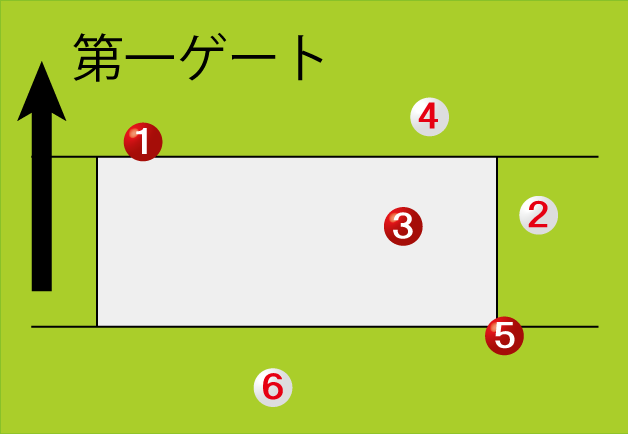 How to put stroker's ball in the start area: The start area (gray) is a two-meter wide rectangle. Players can put their ball anywhere in this area. Most players put their balls on the fourth line where the distance to the first gate is the shortest. In this example, all red balls are rightly put while all white balls are invalid. 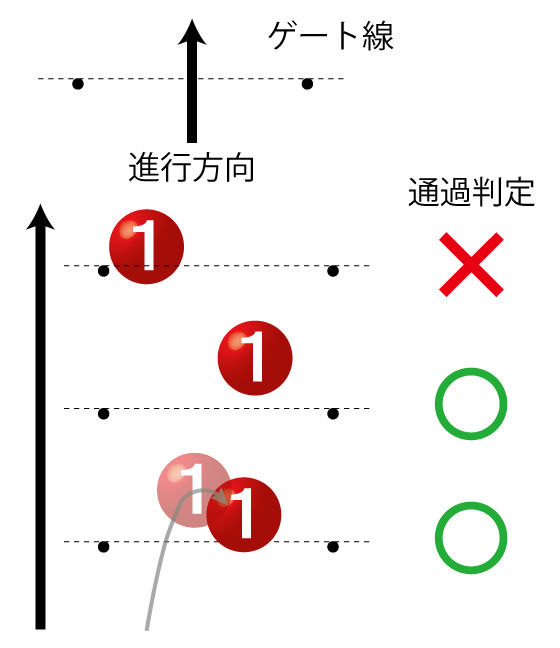 2. When the stroker makes a successful pass for the 'next' gate, the point of the ball is added by one point and the stroker will get the right for continuous stroke.

One point is added to the stroker's ball immediately after the stroker makes a successful pass. Gateball is a team sport. The team who gained more points will be a winner but each point is not directly added to the team but to each stroker's ball. When the game begins, all balls are zero-point balls. Every time it passes the gate, the point of the ball will change from 0 to 1, 1 to 2, 2 to 3 for the first gate, second gate and third gate, respectively. Each stroker's ball can pass the specific gate only once. Passing the same gate twice or passing the gate from back side is not regarded as successful passes. They are not fouls, though. 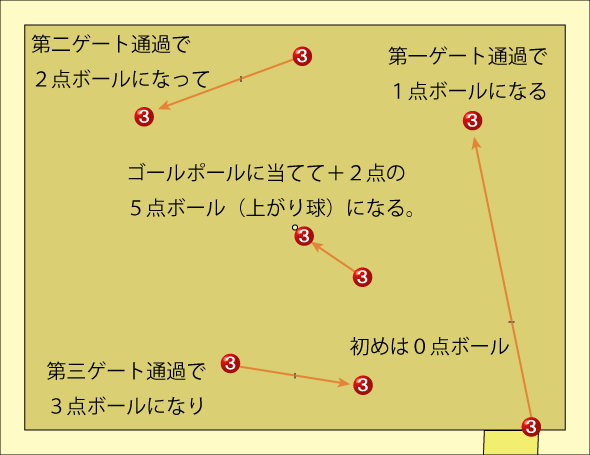 How to gain points:In gateball, every time the stroker's ball passes the next gate, one point is gained. The gates are uni-directional and the strokers cannot skip them. After passing all three gates in the supposed order, those balls can try for Agari to gain two points. The ball which makes a successful Agari will be removed from the court.

Now that you have learned all scoring plays of gateball, you can calculate both teams' points. Each ball has five possible points; 0, 1, 2, 3 and 5. Both teams have 10 balls in total. The number of possible score patterns are 5^10 (I'm not talking about the summed score).

Later I am going to talking about what we should do when both teams' scores are tied. It is relatively tough task for the player to keep ten balls' scores while playing. Fortunately, there are some managing devices to keep scores during the game. Did you understand how to calculate the score? Short quiz: can any team gain 24 points as team's points? 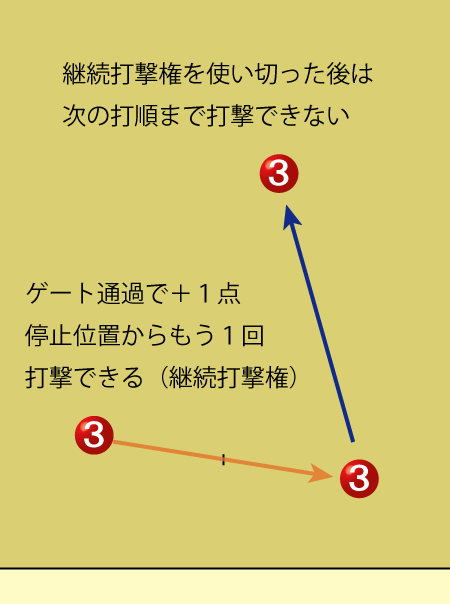