Gateball rules are quite complicated. There is an official rulebook here (English version only) . I will not go into details of every single sentence of the rulebook. I will show you its summary instead. It will help beginners get the gist.

If you download the official rulebook above, you can study gateball rules without any ambiguity, but it is very hard for the beginners. Also, as is often the case with rulebook, all sentences are equally weighted. Pointing out which rules are more important than others is what only experts can do.

Gateball rules are revised every four years. The last revision was in 2015. All gateball players have to update the rules to the latest version. In this article, I'm going to write about the outline of the game first and then the characteristic features of gateball. 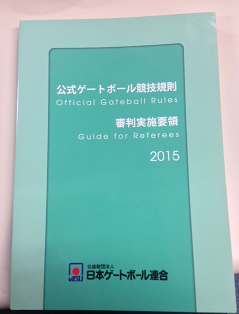 All five players on one side play the red or white balls. Teams playing red/white is called a red/white team. Each player has his/her own number from 1 to 10 and plays the fixed ball of your number during the game. Every time you pass the gate "successfully", you gain one point. After passing all three gates, you can hit a goal-pole and get additional two points. The playing time is 30 minutes. All gained points are summed at the end of the game and the team with the greater total points is the winner. Players must wear bibs which show your playing order in official games.

The game will begin when the chief referee calls "Play ball". Red 1 plays first and after his/her turn "finishes" followed by white 2 according to the playing order from one to ten. After white 10's turn finishes, red 1's turn will come again and followed by white and red balls alternately. The player who has a turn is called a stroker.

The important point is that both teams play alternately until 30 minutes pass. The stroker's turn always comes after the last stroker's turn is over, so there wouldn't be multiple players in the court. As there is only one player in the court, you can play singles, doubles or triples. The first one cycle from one to ten is called "the first round." and following cycles are called "the second round", "the third round" and so on. There are 5 or 6 rounds in ordinary gateball games. 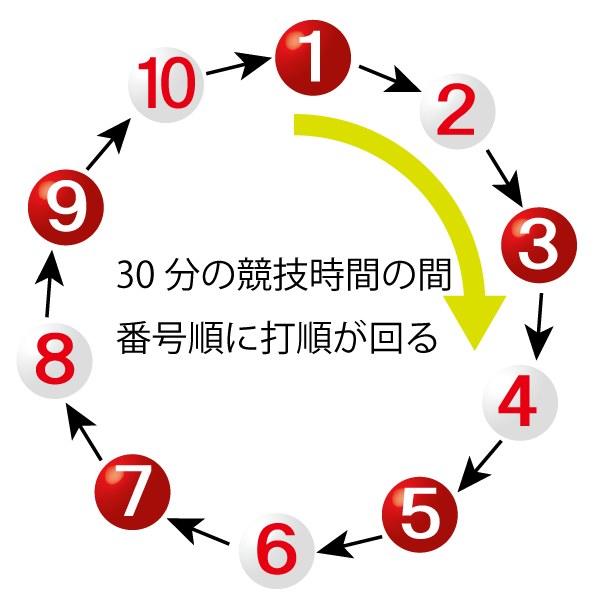 Red and white teams play alternately until 30 minute playing time is over.

Strictly speaking, the actual playing time is usually a bit longer than 30 minutes. There is only one exception called a perfect game. If all five balls on one side make agari (=finish), the game will end instantly. 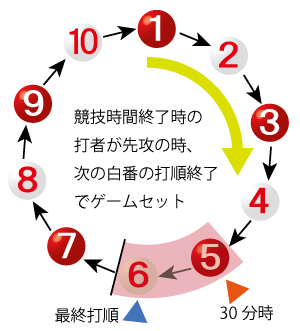 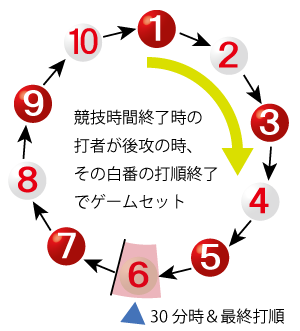 What makes gateball distinct from other ball games is the importance of the strategy. Technique is critical but five good players can be wasted if they are organized badly. Of course, any sports have their strategies. In gateball, it is more directly relevant to the result of the game. It is probably because of 1. Turn system, 2. The game structure (the past plays affects the future situation) 3. Many variables (10 balls' scores, positions, time etc)

Strategy is as important as or even more important than technique. If you want to play as you planed, you need skills to follow that strategy. In chess or go, you can move as you want, but in gateball, the moves are limited by your technique. Strategy and technique is often likened to left-right wheels of a car. If you lack one of them, the car will lose control. Good strategies make "good" technique 100% effective, good techniques expand the varieties of strategy you can take.

Relationship between technique and strategy