This article reviews gateball history from its birth to present. It also gives an overview that where in the world gateball is played.

Gateball was born in Hokkaido, Japan just after WW2.

Gateball was originated from Japan. In 1947, when Japan was still in a mess after the war, Kazunobu Suzuki in Memuro, Hokkaido invented a new sport for kids based on Western association croquet and named it gateball. He invented gateball to prevent them from becoming gangs. The rules at that time were significantly different from the current official rules.

Gateball became popular almost 20 years later. Gateball players had followed local rules by that time, when the first common rules were set in the southern part of Japan. Since it is relatively low intensity exercise and good for cognitive training, it attracted people's attention as a leisure sport for the elderly. During this period, gateball explosively, virally spread all over Japan.

In 1984, the first national gateball union named JGU (Japan Gateball Union) was established. The biggest gateball games have been held by JGU since then. In the next year, WGU (World Gateball Union) was born. WGU has more than 16 members now. There have been many promotional events of gateball mainly in Asia. Thanks to their and their collaborators' efforts, gateball has become popular in the East Asian countries and regions such as China, South Korea, Taiwan and HK etc. In the next chapter, let me briefly introduce gateball's current situation in the world. 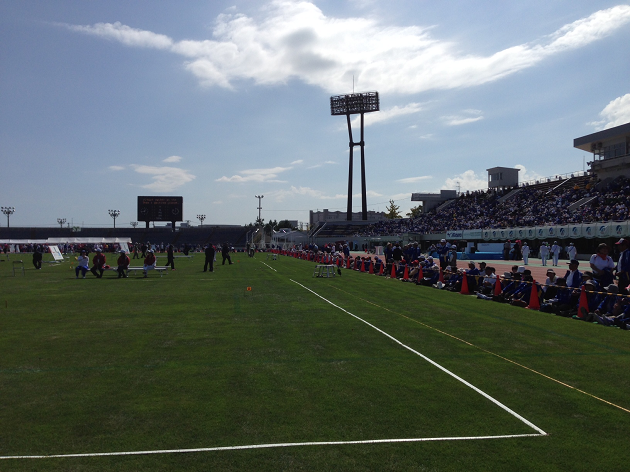 Current situation in the world

China has the world largest population of gateball players. If you believe China's statistics, there are about ten million players in mainland China. Though I don't know the actual number, it is definitely more than that of Japanese. Chinese players' gateball skills are very good. China teams won the recent World Gateball Championships in 2010 and 2014. Online gateball resources such as videos and forums are abundant but unfortunately all are written in Chinese.

Japan, the birthplace of gateball, has the second largest population of the players and their skills are also quite good. JGU says the number is from 0.5 to 2 millions. I think the former figure reflects the reality better. Japan teams won the recent Asian Gateball Championships in 2004, 2008, 2012. In World Gateball Championship 2014, Japan team won the second place.

Gateball is actively played not only in the above two countries but in South Korea, Taiwan, Hong Kong, Macau, Singapore and Philippines. Recently gateball has rapidly become popular in Indonesia. As Indonesia has more than 200 millions population, it can be a blue ocean. In Southeast Asia, Thai gateball players are energetically promoting gateball. The local gateball players teach gateball to the surrounding coutries like Laos or Vietnam. There are three gateball associations in India.

Russia has some gateball players in Sakhalin island in the Far East. Most countries or regions mentioned above are the member of Asian Gateball Union (AGU). Asia has by far the largest number of gateball players. It has been the most promising region and will be.

South America is the second largest center of gateball. It is mainly played by Japanese immigrants in Brazil, Uruguay, Paraguay, Peru, Bolivia and Argentina. Especially Brazil, whose players' population is the largest, has the most skillful players among them. I watched them playing in World Gateball Championship in Niigata. Their performance was marvellous. South American Gateball Championship is held every two years.

Played in the United States and Canada. In 2014, American, Canadian and Japanese gateball players held friendship matches. In the United States, most players are Japanese immigrants or their descendants. Since this region has relatively large population, we have a great opportunity to further promote it.

Played in Australia. Australia is the first country where gateball is played by non-Asians. The mother of gateball, croquet was born in the UK and is played mostly in the Commonwealth of Nations. Australian croquet players got interested in gateball and they started playing it. They hold international gateball tournaments every year.

Like in Australia, croquet players are trying to begin playing gateball. Promotional events were performed in France, the United Kingdom and Germany, organized by the volunteers from Switzerland and Belgium. I joined the event in Ripon, UK in 2014. In September 2014, teams from Switzerland and EURO participated in the World Gateball Championship all the way to Japan. British gateball players are going to hold the European Gateball Tournament 2015 in Ripon, UK. Promising.