Hello everyone. I am KMJ, Japanese gateball player and in late twenties as of Jan, 2015. There are many reasons why I made this website about gateball. The following three reasons are the most important.

First, I'd like to briefly talk about above three purposes. (The color of the subhead stands for what the topic is about. Please see the legend at the bottom of this page.) 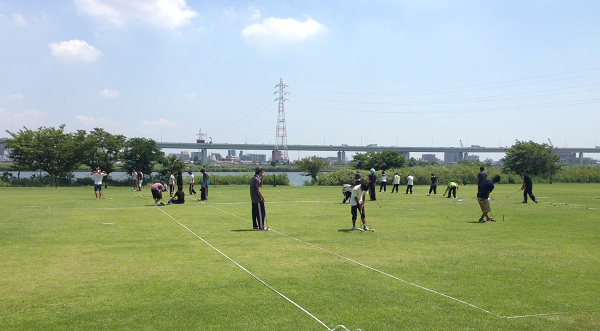 Playing gateball at the bank of Arakawa, Tokyo

1. To let you know what gateball is (for people who haven't heard of gateball)

Gateball is a very popular sport in Japan. Almost all Japanese know what it is. But what about in the rest of the world? It is quite popular in the East Asia, but in the other regions of the globe such as South America or South East Asia, it is still a minor sport. Europeans may have never heard of it.

Gateball is a modified version of croquet. It is a team sport and each player strikes the ball with a mallet to pass three gates in the court to gain points. That's why it is called gateball. I will explain the basic structure of the game later. Gateball is suitable for all ages because of its moderate exercise intensity, highly strategic and simply a lot of fun.

Gateball is not only a leisure sport for the elderly people, but also a very competitive sport for the young. Actually, many international tournaments or championships are held regularly. I watched World Gateball Championship in 2014. It was fabulous!

Making website is the most inexpensive and the most efficient way to provide information to the future player candidates. I hope gateball will be played by more and more people. I want everyone to know gateball is a very interesting, sophisticated and attractive sport. You cannot be interested in what you don't know. Don't you know gateball? What a bad luck!

2. To provide online gateball resources (for gateball players all over the world)

There are several online English gateball resources. Most of them are written by Australian, US or Hong Kong players and sheerly well-written, but their main purpose is to describe what gateball is. As gateball is getting more and more global, we need other kinds of information, for exapmle strategy, technique and refereeing. I think the strategic part is the most important among those three. Strategy makes gateball much more interesting. Without it, playing gateball is much like playing miniature golf together. Do you want to play miniature golf in a flat rectangular court?

3. To make gateball more famous and popular (for everyone)

The third aim is relatively simple. I really want gateball to be more famous and popular. In Japan, gateball has some kinds of prejudice or stigma that it is for the elderly only. That frustrates me. Where gateball is less popular, you don't need to get rid of those silly biases. I honestly don't know any sport that can be played by a grandmother and her grandson on the same court. Gateball is not for the elderly but for all ages.

I'm confident that gateball has enough potential to explosively spread outside Asia. The strategy is profound and the technique is beautiful. Gateball will never bore you. If you are interested, let's get started!

Legend: Relationship between the color of the subhead and its topic